Marco Vezzoso is a jazz trumpet player born in Alba, where he began studying classical trumpet at the age of 10 and continued until he graduated from the conservatory of Turin. Always passionate about jazz and improvisation, he has frequented numerous masterclasses by great masters such as Paolo Fresu, Dave Douglas and Wynton Marsalis. Since 2012 he has lived in France where he is professor of jazz trumpet and coordinator of the jazz department at the national conservatory of Nice. He has 8 albums as a leader, one of which was recorded in Osaka with original songs composed by him, two others formed entirely from original compositions and two with reinterpretations of Italian songs. For more than 15 years he has been producing in the most important European and Asian festivals as leader, sideman, arranger, director of big bands, director of various ensembles, between jazz and classical music. He has numerous tours to his credit in China, Japan, Indonesia, Malaysia, France, Norway, the Czech Republic, Turkey and Italy.

It also collaborates with RAI in the creation of soundtracks for advertising and cinema. He has more than 100 original songs to his credit and tirelessly continues to compose and play his music. 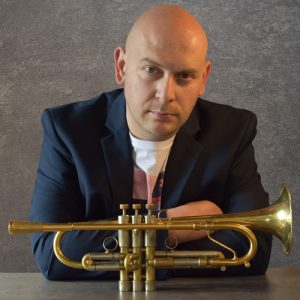