Dominique Di Piazzawas born in Lyon, France, with Sicilian ancestry and a gypsy stepfather. He started playing electric bass in 1979.

After some time, he managed to free himself from the pervasive influence that Jaco Pastorius had over most bassists at the time, by creating his own style. Self‐taught, he added an extra high string to his 4‐string bass and created his own technique of using the right‐hand thumb, index and middle fingers. This unique ap proach enabled a virtuosity and style that is quite unusual in the world of bass. This right hand style gave birth to the « four‐finger picking » technique later popularized in Europe and the US by several new‐generation bassists.

Dominique’s great knowledge of bebop, his gypsy and neo‐classical influences, his lyrical style and his advanced harmonic concept have combined to make him one of the most innovative bassists in the world today. 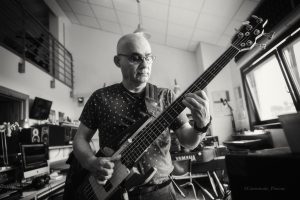